The Art of Saying No in a Professional Setting 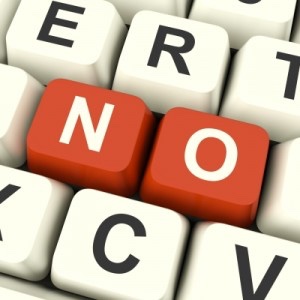 What does it take to say a simple “No, thank you”?

A lot of courage, it would appear. For many people, saying no is a matter of losing out on an opportunity to gain precious approval – even if the person on the other side is a complete stranger. For others, it is a matter of cowering down, because they do not know if they deserve better – or if they can get any better even if they tried. So basically, if we were to break it down into one neat ingredient, this is what goes into the recipe: insecurity.

That’s true. Insecurity is the simple answer to life’s many questions. But these are the situations in which I learnt to say No: (yes, it worked!)

1. Pay: This would usually put me in a spot. In order to avoid potential unpleasantness, I would instantly say yes to whatever was being offered to me for a job. But life has taught me otherwise, and today, I smile and stick to whatever I have put across as my per hour/per word rate! And surprise, surprise – people do not say no!

2. Hours: As a freelancer, many clients try to bull doze their way and ask me to come over to the office twice a week. My way of saying No to this has evolved in a simple step: I make my position clear right from the start by explaining that I will be a lot more productive without the transport and travel time (which I can spend by churning out extra content).

3. Contract: When it comes to work – any work – it is important to have things down in black and white. I now insist on a contract, signed by both parties. And when someone says, “later – I am in a hurry for this work”, I usually ensure I send them work that cannot be copied (pdf files, etc), until the contract is in front of me.

4. Enthusiasm: Sometimes, it is important not to jump the gun and volunteer to do work that is out of the purview of what you signed the contract for. So, if I see that a small side task like marketing needs to be taken care of while I develop the content – I let the marketing department know (with a CC to the boss), instead of rubbing my hands and jumping up and down with glee at the prospect of making a dent of an impression with the extra work (which usually never happens anyways).

5. Be Clear: Always be clear about your deliverables, timelines and other aspects before you start out. Manage expectations from both ends – not just your boss or clients’. Give people a realistic picture from the get go to avoid saying No later and letting them down.