What do you do when you see the camera slowly panning over towering neo classical structures in bustling London, before the said structures suddenly turn into Lego Land on automation steroids – jumping and popping with fluid beauty, much like a matrix in symphony? You sit back, and forget to munch on the popcorn you so diligently bought before the start of this part sci fi, part super hero, part comedy movie. Somewhere between Star Wars and Dead Pool lies this new marvel from Marvel. Read on to know more!

Dr Strange (Benedict Cumberbatch) is a very famous, very arrogant surgeon with a photographic memory. His hands develop a tremor after a particularly intense accident, rendering them useless. All hell breaks loose in his life and he turns to one procedure after another to bring back normalcy. At the very tether of his patience lies one answer – Kamar Taj. 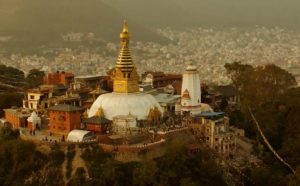 Set in faraway Kathmandu, this place is run by the Ancient One (Tilda Swinton). With a little humour and gift shop magic, they manage to hold Strange’s attention long enough to throw him into an astral world where he finds himself floating in a purple Avatar like setting, an abyss full of mushrooming grotesqueness and much more. Thereafter begins his training with fire Tantra and his dangerous questioning antics. So far, so good. Until Dr Strange asks about getting his hands fixed because he has a living to make. That is when the crew at Kamar Taj suddenly begin to sprout lines from your favourite self help book. Obviously, because rent money is so overrated. Obviously.

The rest of the move turns into a butcher fest with blades being shoved into chests and operations happening in the real world. Rachel McAdams and her limpid eyed beauty sits well with the humour that underscores the various scenes where she comes forth to show off her underused skill. Tilda Swinton and her ethereal smile enthrall and hold you captive as you watch, riveted, waiting for one mystery to unfold after the other. Humour, as mentioned earlier, is peppered throughout the movie and the lines last long after you have left the theatre and deposited those 3D glasses.

Here is my grouse. To begin with, why would you use such wonderful performers in such an ill drawn plot line? Somewhere between tapping into your inner self and the war between the good and the evil, the movie loses the plot. Neither theme has been appropriately drawn out, the narrations almost hurried. Further, what is the point of showing Kathmandu as the hub of all Himalayan mystic magic? Cliched, much? Is that all the East means to Hollywood? (Hello, thriving IT industry, which may been churning out those special effects for the movie thanks to a small function called outsourcing).

While many questions remain unanswered, here’s hoping to see more in the sequel(s). Let the franchisee begin!